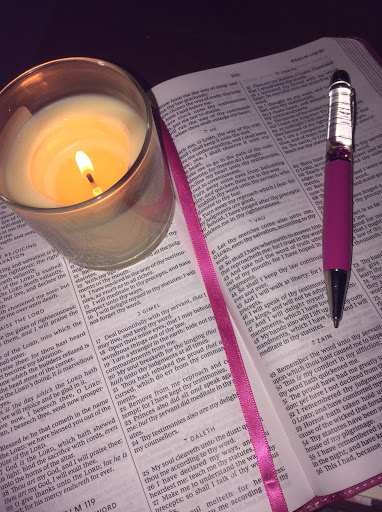 “National Bible Bee? What’s that? You mean that Scripture competition thingy where you have to compete to see who can memorize the most Bible verses?”

That was my response, when I first heard of the National Bible Bee (NBB). My friends from church wanted me to join, but, honestly, I didn’t want to. Don’t get me wrong; I loved reading the Bible. But eight hours a day? No thank you.

But my friends really wanted me to join. “You don’t have to do the competition,” they told me. “Just do the Summer Study. I think it would be really good for you.” I didn’t want to disappoint them, and so, somewhat reluctantly, I signed up for my first year of NBB.

It was exciting to get my pretty violet Discovery Journal (DJ) in the mail with the word Trust lettered across it. At first, however, it wasn’t quite enjoyable. I couldn’t yet see the benefits, and I was already busy, so trying to fit in an extra hour a day to study for something I didn’t really want to do in the first place was only causing me stress. But I didn’t want to let my friends down, so I kept going.

Day by day, as I pressed on, I started learning new things. It was amazing to see how Joseph trusted God when betrayed, falsely accused, and sold into slavery, and how he forgave his brothers just as Christ forgives us. I was sure I would never be able to forgive like that.

One interesting thing I’ve learned throughout my life is that when God teaches us something new, He will usually test us on that very thing, much like a teacher would. Perhaps when I least expected it, my test came.

I tend to be a very private person, and I only tell the things closest to my heart to the people closest to me. I told a friend something very personal and specifically asked her not to repeat it to anyone. Rather than keep the secret, she spread it, and I was mortified.

At first, I was hurt. Why would she do such a thing? As an attempt to distract myself from the pain, I began to think back through the things I had learned in my DJ: how Joseph forgave his brothers when they betrayed him, how he forgave Potiphar’s wife when she falsely accused him, how Christ forgave those who nailed Him to the cross. How He forgave me, for it was my sins that nailed him to that tree. And I began to think, “If Joseph could forgive his brothers, and Jesus could forgive me… then I can forgive my friend.” And by God’s grace, I did.

Now I could see it — the whole reason for NBB. It’s not about who can memorize the most passages. It’s not about completing a DJ. It’s not about qualifying for the National Bible Bee Competition (NBBC), or getting a high score on a test, or any such material thing. It’s about hiding God’s word in our hearts and letting it transform our lives.

By God’s grace, I was able to qualify for NBBC. Now that I could see the true purpose of NBB, I was excited to participate. I had made a lot of great friends through the NBB social community as well, and I was hoping to make semi-finals so I could meet them. For two months, I studied and memorized day and night, hoping desperately to make it. Everyone told me they were sure I’d make it.

I was devastated. I had worked so hard for this, and now… it was over. I had lost. Failed.

It took a while, but soon, I began to catch the bigger picture, like a sunrise after a dark night. Perhaps this was another test. I had spent four and a half months learning to trust God… now, in this small trial, did I dare? Would I trust Him, even though I didn’t understand?

It wasn’t easy. It never is. Why? Because I’m just a weak mortal, so often confused and led astray. But He is strong and faithful, and He is ever worthy of my complete and total trust.

Now, this year, I can’t wait to study Witness! Since the beginning of this year, God has been laying it on my heart to share the gospel with others and be a better witness for Him. I can’t wait to see what He will teach me, and you, through this study.

If I could speak to my confused, sixteen-year-old self asking, “National Bible Bee? What’s that?” here’s what I would say:

It’s a life changing experience. Why? Because you’ll feel so awesome if you win? Well, I’m sure it feels good to win, but no, that’s not why. The reason is because the Word of God is living and active, and it will transform your life, if only you will give it the chance. Ten years from now, you won’t be able to quote your passages word perfect anymore, no one will remember how good or bad your test score was, and your medals will be up in a box somewhere collecting dust. But the priceless treasure of God’s Word will ever abide in your heart, and nothing can take that away.